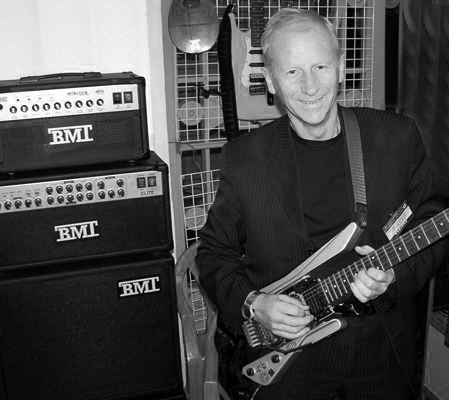 Everything started back in 1976 when the future founder of BMT Vladimir Babashkov, student of the Radio Engineering Faculty of the Kiev Polytechnic Institute, started playing the guitar and created a music band. Listening to music albums from Western countries, he tried to get his guitar sound close to what he heard on the recordings. Since it was almost impossible to get a guitar equipment manufactured abroad in the Soviet Union at that time, he decided to use his knowledge from the university on practice and began the development and manufacturing of guitar effects, first for himself, and a bit later - for other guitarists. Gradually he got more and more experience, new connections and collaboration with various bands. These were challenging, but exciting times, filled with creativity, engineering, music and drive. After the fall of the Soviet Union in the early 90s difficult decade of changes came, the country was suffering from hyperinflation, so Vladimir stopped making guitar equipment, since at that time most of the musicians were, basically, out of music - to survive as they could. But passion for music is a forever thing. And so, after the situation became stable, in 2005 he returned to origins by organizing BMT – guitar equipment producer, which specializes in the design and manufacturing of tube guitar equipment. The same year they released their first tube floor preamp Tube Wizard, which has since been upgraded several times, and actually become a best-seller. After that preamp BLACK DIAMOND, amplifiers Elite, MINILUX, PUNCHER, ENERGY and guitar cabinets of different types were designed. Since then and to these days we do not stop our constant development.

We permanently improve the products, gladly cooperate with the new distributors and participate musical exhibitions in the CIS countries. In 2009, Vladimir’s son Yegor graduated from the same faculty as his father did. Now it is a family business, where he and his sister Daria are involved in marketing and distribution processes, while the father – in the development and production. We do our equipment with a great love for music. How can anything other than music to such an extent affect our mood and perception of the world? World of sound is absolutely magical. We, in our turn, try our best to make it even better. Production cycle takes place on the territory of Ukraine in the city Zhytomyr. We have a team of truly enthusiastic people who love what they do. It helps us to make really good and bright products. We focus on an unprecedented quality and functionality. As a result, we create tube and classy sound!  We are not chasing the numbers. Our product range includes only carefully crafted product range. Constant modifications of existing models - it's a good tone in BMT, as there is no limit to perfection! In contrast to mass production based on sales volumes, we are the company of a boutique type, where all equipment is entirely handcrafted from high-quality components with great dedication. Today we offer guitarists floor tube preamps and amplifiers - combo and head, as well as the cabinets. Guitarists in Ukraine and neighbor countries are already well familiar with our brand. Now BMT is available for order for guitarists from Europe, the USA and worldwide!